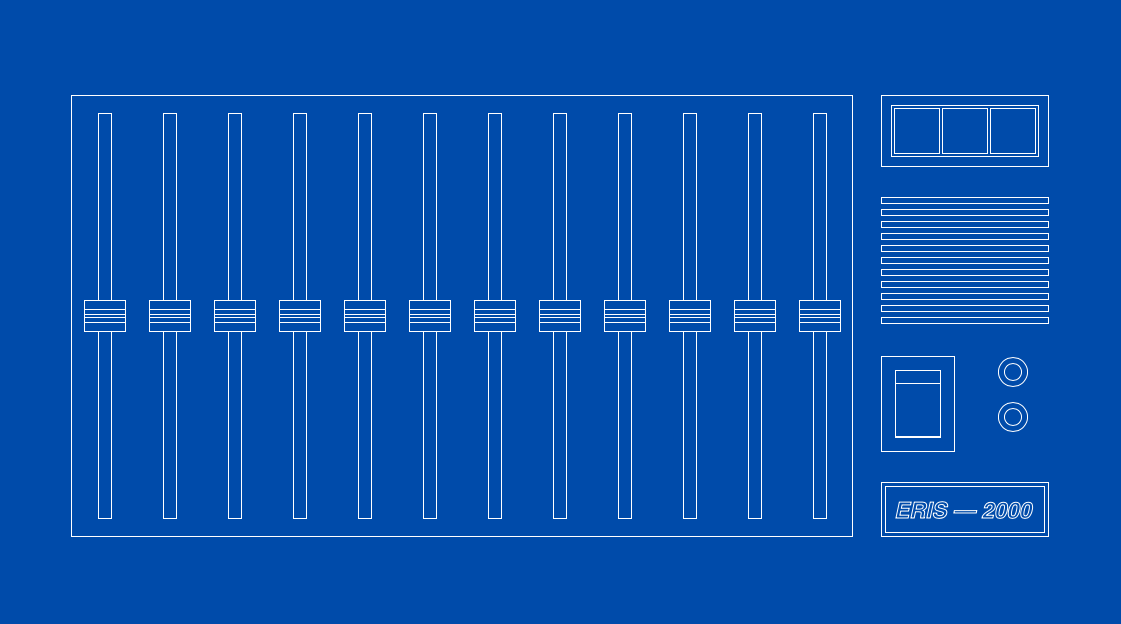 A project by William Fairbrother, Alberto Ruiz Soler, and Oliver Smith, adapted for IVC from eris-2000.co.uk.

It is impossible to measure the infinitely complex world in which we live.

ERIS–2000 is a scientific instrument invented by cybernetician Erica Symms in 1971. It was used to show and study, through a simplified simulation, the consequences of human decisions on complex systems.

The device is covered with an array of operational switches including twelve potentiometers fitted to the top surface. Turning the device on, the machine calibrates itself and starts emitting sound.

To use the interactive simulation of ERIS–2000, please click here.

Cybernetics is an approach for exploring regulatory systems, their structures, constraints, and possibilities. During 50s, 60s and 70s this approach kept expanding into many scientific fields, developing our understanding of complex systems. Nowadays most of this research is underrepresented and not known by the general public. Individuals such as Stafford Beer, Ranulph Glanville, Norbert Wiener and Gordon Pask made progress in the field. Project Cybersyn is an iconic example where a cybernetic system was used to analyze and make decisions for the Chilean government.

The aesthetics, politics and science from this time period has been synthesized in ERIS-2000 which both explains how a complex system works and comments on this important time period.

Components in the system may be ignorant of the behaviour of the system as a whole, responding only to the information or physical stimuli available to them. This causes interactions to be primarily but not exclusively with immediate neighbours.

The relations between components contain feedback loops that may be positive (amplifying) or negative (damping). The effects of a component’s behaviour are fed back to in such a way that the component itself is altered.

Note that a complex system requires a constant flow of energy to maintain its organisation, unlike a chaotic system. It will eventually return to a regular state after experiencing a cascading effect.

ERIS–2000 is a fictitious scientific instrument. Erica Symms never existed. But similar devices and people did during the 1970s. The fictitious Erica Symms was a computer science lecturer at Birmingham Polytechnic, a well known institution for computer science and theory. The character is female recognizing the number of women who programmed machines in this era.

The aesthetics, politics and science from this time period has been synthesized in ERIS–2000 which both explains how a complex system works and comments on this important time period.

Although created digitally, the machine has the potential to be physically manufactured. Elements of the design have been based on the dimensions of real components. Design features such as big buttons, lights and operational switches are faithful to the time period.

The iPad app accompanying the informational video gives the audience a tangible way to relate to complex systems and reinforces the fiction.

Just as a complex system is often composed of a series of complex systems nested within one another, this project has many layers that relied on one another to be successful. The device was modelled and animated on 3D software (SketchUp Pro and Blender), an HTML/CSS interface was created (running on an iPad) using Javascript to control the system and allow it to communicate with a Max/MSP patch designed to generate and modify the sound according to its interaction.

InVisible Culture: An Electronic Journal for Visual Culture (IVC) is a student run interdisciplinary journal published online twice a year in an open access format. Through peer reviewed articles, creative works, and reviews of books, films, and exhibitions, our issues explore changing themes in visual culture. Fostering a global and current dialog across fields, IVC investigates the power and limits of vision.

For its twenty-ninth issue, InVisible Culture: An Electronic Journal for Visual Culture invites scholarly articles and creative works that address the complex and multiple meanings of love. According to...

No Party Favors: A Review of Happy Birthday, Mr. Hockney at...